Some of you might have stumbled upon an unexpected error message, while updating your project from ng7 to ng8. We all know that. Everything runs smoothly and we use the last 10 minutes before heading off for the update. Not a major issue. Already having packed your stuff and ready to head home, you get this message.

What went wrong? Lets have a look, as knowing this might save you a little time and surprises.

To learn in depth what they do and how to use them you can check it out here.

Lets have a look at an example we used earlier in this blogpost about Content Projection in Angular. The following code shows the old version in Angular 7, where we included three directives with the selectors appCardBody, appCardFooter and appCardHeader.

To show both decorators we also included In the Card Component as @ViewChild in app.component.ts as followed:

So the application is running great and we decide to update from Angular 7 to Angular 8. After the update is finished we see, that the @ViewChild and @ContentChild decorators complain about a shortage of  arguments. Why is that? Whats happenig here?

The solution comes with the timing of the component initialization. Lets dig into this and find out.

The reason for this error is fast and simple to detect, if you know what has changed in Angular 8. The missing argument is the newly introduced static-property. It is a boolean, that determines the timing of component initialization.

So without the static argument, the decision when to resolve the query was made by the compiler. Each case was examined an decided individually. The @ViewChild/@ContentChild queries got bundled in two categories. Static and dynamic. Following this categorization, the querie results were made available at different times:

Now it is possible (and necessary) to define the timing of initialization proactively. Here it is, where the static property gets relevant. If you set static false, the component ALWAYS gets initialized after the view initialization in time for the ngAfterViewInit/ngAfterContentInitcallback functions. This is the matching with the standard case of the old configuration, except that it is now forced. If static is set true, the initialization will take place at the view initialization (ngOnInitfor @ViewChild and @ContentChild).

So now lets try it! We work with both options. As you can see in the following code snippets we add the argument {static: false} into the decorators. Additionally we include some console logs, to showcase the behaviour for the different options. 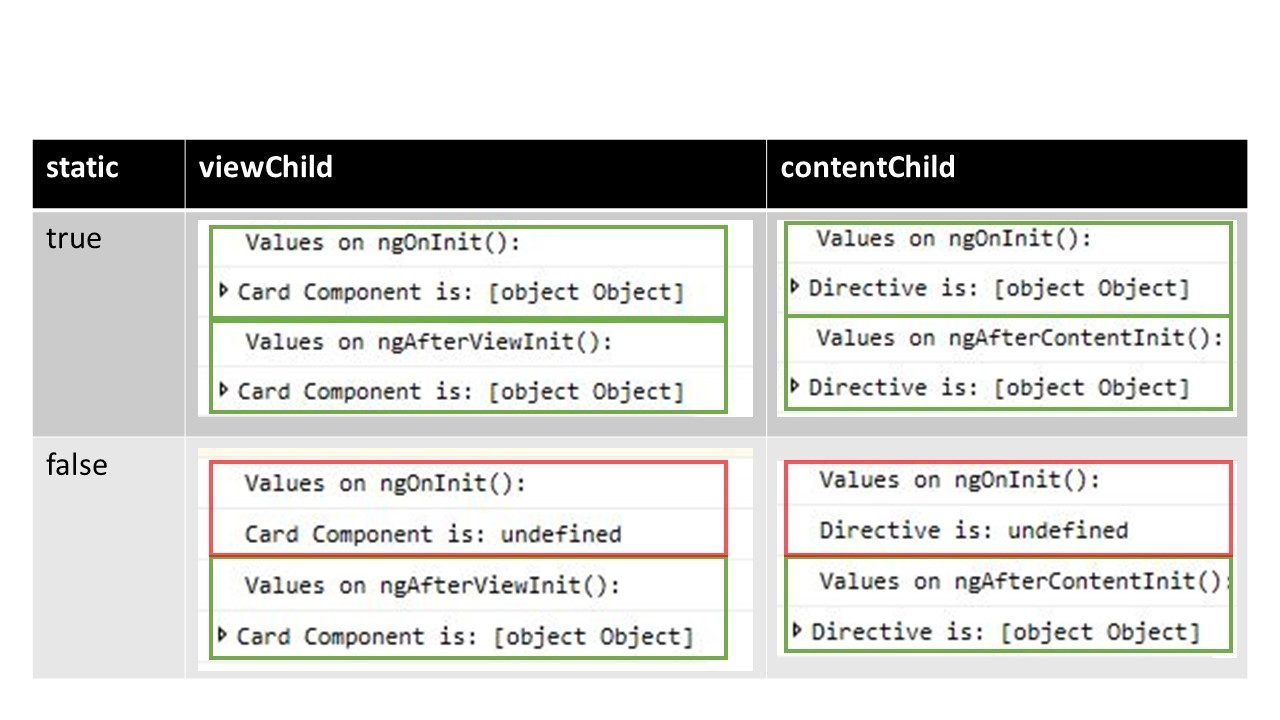 What is the best Strategy?

You now wonder what you are supposed to do with this new superpower? Here are some ideas:

As often in life it depends on what you want to achieve.